Friday, May 21, 2021|Conservation, Freshwater Mussels, In The Field|

Prior to rapid urban and agricultural development in North America during the 19th century, freshwater mussels were as common as pebbles in any of Minnesota’s babbling brooks.

“There were places you couldn’t put your foot down in a river without stepping on one. It was like a cobblestone road paved with mussels,” says Mike Davis, Director of the Center for Aquatic Mollusk Programs (CAMP). 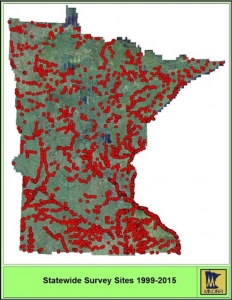 Freshwater mussel survey sites completed in all 81 watersheds in Minnesota have found that mussel populations are drastically reduced in southern Minnesota.

Davis has been working with mussels since 1987 when he completed his first mussel survey of a Minnesota river. Since then, the team has grown to include Bernard Sietman, Zeb Secrist, Madeline Pletta, and Lindsay Ohlman (and many other talented employees that have since moved on). Over the years, mussel surveys have been completed in 81 watersheds in Minnesota, and in 2014, a mussel lab was established to facilitate propagation and reintroduction efforts that continues to expand holding systems and the number of mussels they can produce per year.

Depending on the season and breeding cycles of different mussels, DNR staff head to the field to collect female mussels that are holding larvae to produce the next group of mussels for rearing. Growing these mussels in a lab dramatically increases survival and, with eventual release of these ‘head-started’ individuals, accelerates the recovery of wild mussel populations. The unique life cycles of these animals require that their young attach to and grow on fish for the first weeks of their lives. Some mussels are very picky and have one fish species that will work for this important developmental step. 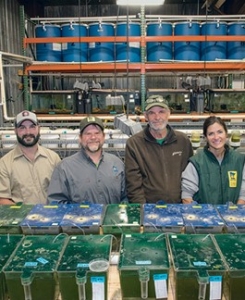 A hallmark of the CAMP team’s impact on mussel populations in Minnesota and beyond, both Mike and Bernard were announced as two of the four U.S. Fish and Wildlife Service’s 2018 Endangered Species Recovery champions for the Midwest Region, in part due to the lab’s work to identify the host fish species of the federally endangered Spectaclecase mussel, which had been a complete mystery. This finding has made recovery work on this imperiled species possible.

When not in the lab, the team conducts surveys of mussels that have been released in the past to evaluate the success of reintroduction efforts. Finding a young, unmarked mussel near a release site is good news, indicating that the mussels are successfully reproducing. 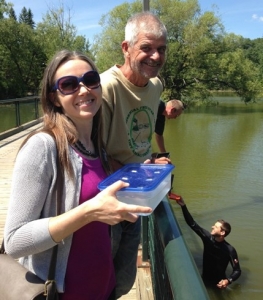 Tara Harris, past Zoo Conservation Department Director, holding a container with nearly-invisible baby mussels to be reared at the Zoo handed to her by Mike Davis, Director of the Center for Aquatic Mollusk Programs.

Since 2015, the Zoo has been able to support the reintroduction efforts of CAMP by head-starting mussels for later release. In 2020, 1,000 mussels from the Zoo were returned to CAMP as part of a release in the Cedar River. Today, we are holding nearly 3,000 additional individuals for eventual release, and later this spring, we will acquire thousands more to supplement the number of mussels CAMP can produce for the 2023 reintroduction season.

The Zoo also has developed educational resources about native mussels and Minnesota’s aquatic ecosystems, and we host the annual “Show Us Your Mussels” challenge that allows students to create original digital media campaigns about the importance of native mussels and water quality.

We are excited to partner with CAMP to support their mussel conservation goals and to help spread the word about why these mighty mussels are so important and need our help. Stop by the Mussel Lab at the Zoo’s lake boardwalk to learn more about mussels and the work CAMP is doing!