Poaching of tigers and their prey is one of the main threats to the long-term survival of wild tigers, so I’ve come to Peninsular Malaysia to visit the Malayan tiger anti-poaching project we’ve been supporting through the Tiger Conservation Campaign since 2012.  At the WCS-Malaysia office in Kahang, I flip through a set of laminated cards on a large key-ring.  The cards serve as a grim reference set, with each showing a ~5-centimeter piece of snare, of various materials and thicknesses.  They range from nylon rope set for small animals like porcupines, to 2 mm wire set for somewhat larger mammals such as muntjac, to large cable snares set for large animals like tigers and leopards.

The staff pulls out several examples of snares for me to examine.  One end is attached to a sapling or pole, which is bent over and attached in the ground to a trigger mechanism.  Above the trigger sits a noose.  The snares are indiscriminate, catching whatever animal is unlucky enough to step inside the noose and trigger the snare.

Snaring is illegal in Peninsular Malaysia, but they are a popular tool employed by poachers.  At the heart of poaching incidents in the Endau-Rompin landscape that I visited is the illegal harvesting of agarwood – highly sought after for the aromatic resin it produces when infected with a fungus.  Agarwood collectors come into the landscape with no fresh protein, so they hunt wildlife by setting snares.  They use large cable snares to catch big mammals such as sambar deer, barking deer, and wild boar, but they also end up snaring tiger, leopard, tapir, sun bear and more.  Some poachers may also enter the landscape specifically to catch tigers.

In the Endau-Rompin landscape, one of three source sites for Malayan tigers, the poaching problem is extensive and serious.  There are many entry points, making it difficult to monitor for poachers entering the area.  But efforts are being made to contain the problem.  The Tiger Conservation Campaign is a proud supporter of WCS-Malaysia’s anti-poaching work.

WCS-Malaysia is involved in anti-poaching patrols with various agencies on a monthly basis.  This multi-agency effort includes deterring potential poachers by their presence, gathering information about poaching hotspots, and detecting snares as well as removing snares from the field.  Surveillance cameras are also placed at areas with high levels of poaching.  Some of these special cameras send images instantly to the relevant authorities, allowing rapid responses when poachers are detected.

The field work for the anti-poaching teams is grueling.  Patrols can last up to 12 days, and teams have to pack and bring in everything they will need.  It can rain for days on end, making it impossible to stay dry.  Field teams contend with all sorts of annoyances and dangers, from ticks, chiggers, mosquitos, ground hornets, fire ants, leeches, and bacterial/fungal infections to being charged by elephants or outnumbered by poachers.  Patrols can cover well over 10 miles (16 km) a day, up steep hillsides, through swamps, over dense thickets, and across rivers.  At the end of each exhausting day, team members set up camp, eating MREs (meals ready to eat), sardines or anchovies with rice and crackers and sleeping in hammocks under temporary shelters without walls.  The only dry clothes are those they sleep in.  The next morning, it starts again, getting into their wet or dank clothes and walking. It may sound really unpleasant, but the people I met seemed to thrive on it – clearly excited by the prospect of finding tiger signs or repelling poachers.  I’m glad it’s them and not me, since I don’t think I would last very long.  But I left feeling very grateful for the incredibly hard work these anti-poaching teams do to save wild Malayan tigers. 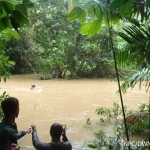 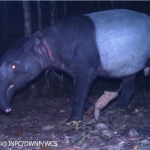 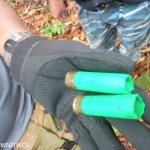 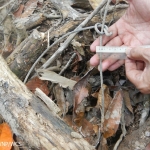 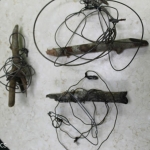