Can Safaris Help Save Rhino? – Part 2

In his last blog, “Can Safaris Help Save Rhino – Part 1”, Jeff introduced us to Desert Rhino Camp, a unique partnership and approach that aims to demonstrate how tourism can contribute towards rhino conservation. 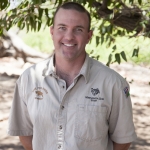 Jeff Muntifering, Conservation Biologist at the Minnesota Zoo, is in Namibia where he works with the Namibian government, a local conservation organization (Save the Rhino Trust), tourism operators and local communities to conserve the world’s last truly wild population of black rhino. Special thanks to the donors who have supported his work, through the Minnesota Zoo Foundation. Listed as critically endangered, only 5,000 black rhino survive in Africa. They are seriously threatened by rampant poaching – especially in neighboring South Africa where more than 3 rhino are poached every day! In the remote northwest region of Namibia, rhino conservation efforts have focused more on ensuring that local people see value in keeping rhino alive. Although over 20 rhino in this area have been lost to poachers over the past 2 years, not a single rhino was killed in areas where rhino tourism operates. Read on to find out more about what a ‘typical’ day on rhino safari with some of Africa’s best trackers is like and how it’s helping protect these remarkable animals…. 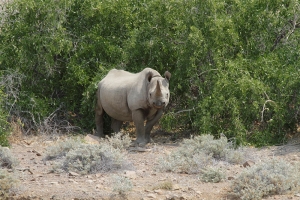 The trackers and I climb into our trusty Toyota Land Cruiser just as the sun peaks over the distant mountains behind camp.  Martin, the team captain, and I sit in the front to lead the patrol while Denzo and Manfred stand in the back for a better view.  Navigating the rough, rocky terrain from behind the wheel is not easy, while the back is basically like riding a bronco all day.  One unseen stone could puncture a tire, which would set us back 30 minutes and a couple hundred dollars.  Despite the unavoidable difficulties, we carry on as the sun’s rays are drawn like a giant curtain in a theatre ready to reveal the day’s new scene.  We leave the tourists behind us for now, still sipping coffee.

The trackers’ trained eyes shift between the horizon and the ground in front of us as they scan for any sign of rhino.  Their ability to detect a rhino with their eyes while I struggle to see them with my binoculars has always humbled me.  Even more impressive is how they can follow rhino footprints across a landscape almost completely covered by softball-sized stones.  They rarely miss a step and just when you feel like they are really only wandering around, there is the rhino right in front of you just as they predicted.

We stop to check a few natural springs (aka the public drinking fountains) where most wildlife in the desert will visit once every few days.  Not much action today except for sign from the more common animals such as springbok and Hartmann’s mountain zebra.  We carry on and soon hit the jackpot, a fresh pile of rhino poop or ‘dung’ as we call it!  Rhino have excellent noses and both male and female black rhino use their dung to send messages to other rhinos.  For example, when a female is ready to mate her dung will have a special smell which the big male rhinos will detect and then go find her.  Denzo leaps off the back and quickly grabs a handful….”soft and still wet, very fresh” he shouts over the engine.  While Denzo inspects the dung, Manfred is already following the footprints like a blood hound.  Martin and I grab our GPS, camera and two-way radio and off we go.

The trackers literally follow each step.  Anytime a footprint is lost, they turn back to find the last track they saw and start again.  They work together as teams of 2-3 constantly weaving back and forth checking not only the soil for prints but any slightly turned stones or nibbled branches.  The trackers move over the stones with incredible speed and grace, hardly ever stumbling or making a sound.  I struggle to just keep up, even after over a decade of accompanying them on their patrols.

Then, after climbing a couple hills and maneuvering over thousands of boulders, we see the rhino feeding peacefully down in a dry riverbed.  The trackers’ quickly identify him as “Kangombe” from the marks on his ears and his large horns and size.  He is the dominant bull in the area and named after a very powerful Chief.  Within a few minutes, the guide and guests arrive.  Martin greets the group, conveys a short yet stern safety reminder, and off we go to approach Kangombe together.  Ensuring the wind is blowing in our face (to make sure the rhino does not smell us), we carefully and quietly get closer – single file, step by step.  We sit on the edge of the river bank and marvel at this prehistoric beast in our midst.  Although we are about 100 yards away it feels much closer in this open expansive landscape and even at this distance that rhino could be on top of you in less than 8 seconds!  Scanning the surroundings and noting the absence of any escape route, or even a climbable tree, cements-in the respect for this rhino’s privacy!  It takes roughly 10-15 minutes for the trackers to record their monitoring data and for the guests to snap some photos and enjoy the moment before we slowly retreat to ensure Kangombe is left undisturbed.  Indeed, he never even knew we were there – our perfect wild sighting.  While we move gradually back to the vehicles, I overhear one of the guests mutter, ‘my heart is still pounding, I feel so privileged to be have been in the presence of a completely wild black rhino completely unaware of us.’  The guide adds, ‘and the trackers got their monitoring information too – knowing that Kangombe is safe and sound is reassuring to all of us, especially in these difficult times.’

Read more about the Minnesota Zoo’s work to save black rhinos: http://mnzoo.org/conservation/around-world/desert-black-rhino/ 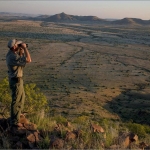 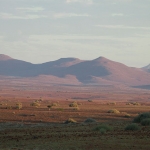 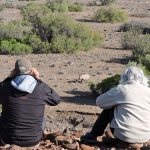