Behind the Scenes with the Zoo’s “Tapir Whisperer”

Laurie Trechsel has been dedicated to animal care for decades. While her education and career started long before, Trechsel first came to the Minnesota Zoo as a keeper in 1988. Her job has shifted and shaped over the decades, yet she remained focused on providing the best care for the animals she worked alongside, using skills and techniques she learned in childhood and through formal education.

“I’ve always wanted to work with animals but I didn’t necessarily think I’d be a zookeeper,” explains Trechsel. “I actually went to veterinary technician school first and it was through an internship at a zoo that I got started in the zoo world.”

After working at the Lincoln Children’s Zoo in Nebraska for ten years, Trechsel returned to her home state of Minnesota for a job here at the Minnesota Zoo. And her background in veterinary technician work has certainly been helpful throughout her career. Her education and experience gives Trechsel the ability to work closely with the Zoo’s Animal Health team to ensure the health and well-being of all the animals in her care. 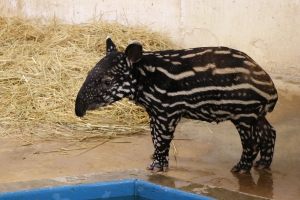 This past summer, Trechsel’s expertise and experience were especially useful as the Zoo welcomed a new resident. Looking a bit like an adorable watermelon with legs, tapir calf Tuah was born to his mother Bertie on August 8th. Luckily for Tuah and Bertie, they had Trechsel, “the tapir whisperer” on their team. And caring for both the pregnant mother and the calf after birth is a demanding job.

“We had a camera on Bertie 24/7 before she gave birth so we could monitor her and know when labor was starting. We lost a lot of sleep those days!” exclaims Trechsel. Luckily for Bertie, Tuah and the Zoo staff, delivery went smoothly and calf and mom were soon bonding together and doing great. “Bertie is a wonderful mom,” says Trechsel. “She’s had four calves now and she knows what to do.”

So how does a Minnesota native come to know and understand these animals so well? The Malayan tapir is, after all, native to the East Indies, and an endangered species. Appearing to be part hippopotamus, pig, and anteater, it’s also difficult to tell what exactly a tapir is just by looking at one. But tapirs are actually closely related to horses, and it may just be this ancient lineage that explains why Trechsel appears to have the magic touch.

“I grew up with horses, so maybe that has helped inform me and shaped the way I work with the tapirs,” says Trechsel. “I learned how to use the TTouch method and I use that a lot when working with the tapirs.” 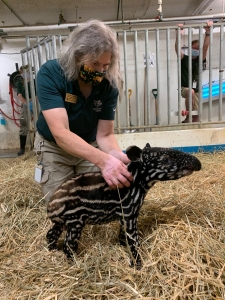 A common method used in animal care and training communities across the world, the TTouch is a technique created by Linda Tellington-Jones, originally on horses, that involves using repetitive circular motions on various spots throughout the body to relax and calm the animal you are working with. When used in just the right spot and with the right amount of pressure, a skill Trechsel has mastered with each tapir she’s worked with over the years, most animals in her care are lulled into a relaxed sleep-like state.

“Each tapir has a sweet spot that you have to figure out. Many of them especially love being rubbed around the eye orbits, the neck, and along their back,” explains Trechsel. “This method also utilizes behaviors that tapirs do naturally and instinctually respond to. Tapir calves need their mother to lay down in order to nurse,” so calves will repeatedly rub their mother’s flank to tell them when they’re hungry, and the mother in turn responds by laying down to feed her calf.

By using this gentle, noninvasive and caring technique, Trechsel and other keepers she works with are able to relax a tapir enough that they can perform health checks and other necessary exams on the animal without needing to use any medication- a certain benefit to both the tapirs and the care team working with them!

Several weeks after his first introduction to the outside world, Tuah the tapir is doing well and wasting no time informing the keepers of his preferences. “Tuah is like his mom, Bertie,” says Trechsel. “They both prefer being rubbed on the neck and back best.” Check out our adorable video of Zookeeper Laurie putting her skills to use while giving Tuah some much appreciated care and attention! 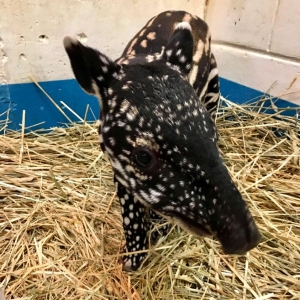 And while only a few months old, Tuah is already a great swimmer and enjoying exploring his new habitat. “Most tapir calves are pretty shy at first when introduced to their new habitat but Tuah went right out the first day to explore. He seems to be pretty adventurous.”

Caring for the diversity of animals at the Minnesota Zoo requires a lot of expertise, patience, time, and creativity. The Zoo is incredibly fortunate and thankful to have the most talented and dedicated keepers as part of our team. And we know the animals in their care feel the same way!