Behind the Scenes with Animal Health: Fruit Bat Surgery

The Minnesota Zoo’s Animal Health team prioritizes the health and well-being of all animals under their care. And that includes some of our smaller residents too! You may have had the opportunity on one of your visits to the Zoo to see the African fruit bats on the Tropics Trail. These small winged mammals are agile flyers, however even the most skilled of individuals can injure their delicate wings. Recently, it was noted that one of the Zoo’s African fruit bats was not able to fly and appeared to be injured. The Animal Health team was quick to respond and found a bat that had broken a small bone in her wing, somewhat similar to a human breaking their pinky finger bone. After further examination it was decided that she would not be able to recover fully without surgery. So with great precision and care, Dr. Lesanna Lahner and Animal Health staff began the not-so-common procedure of surgically repairing a bat wing. 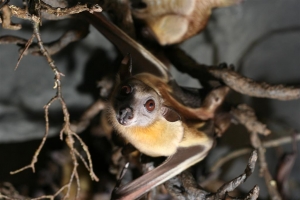 The surgery went well and the small bat was soon in recovery. Part of that recovery process involves ensuring the small animal retains body heat, so Animal Health Specialists cradled the bat in their hands to keep her warm. Fruit bats need to consume a lot of sugar to keep their metabolism going, so this bat was also fed sugar-water to ensure she woke up smoothly from her surgery. This amount of care and attention is not atypical from this team of experts. They proudly do whatever it takes to keep the Zoo’s animals in good health, from the towering grizzlies to the tiny fruit bats. And the Animal Health team is happy to report that their recent patient is now back with the colony, flying and thriving!

Fruit bats, also called “flying bats” in some regions, are a group of bats that can be found across much of Africa and Asia. They live in a variety of habitats, including wetlands, savanna, and tropical forest. As their name suggests, they eat primarily fruit and often prefer figs, mangoes, and dates, to name a few. Fruit bats are an important part of healthy and functioning ecosystems. Many plant species rely on bats for pollination and to spread their seeds. The African baobab tree is one example of a plant that depends on fruit bats for pollination. It’s important that humans continue to protect wild bat populations by preserving their habitats and refraining from killing bats for food and medicine. Bats are also known to carry a variety of viruses and other diseases that can be very harmful to human health. As is the case with other wildlife species, bats (and humans!) do best when given appropriate space and healthy, thriving habitats to live in.