During the entire month of November, the Minnesota Zoo​ will be sharing stories of the many rescued and rehabilitated animals that we care for. All of our animals receive amazing care from zoo staff, volunteers and community members. All of this work is made possible because of YOUR amazing support – thank you! Check back daily as we feature a new story from around the Zoo.

You’ve likely noticed them during your stroll along the Zoo’s Medtronic Minnesota Trail, or viewing of the Wings Financial World of Birds Show. They are majestic. Regal. Beautiful. 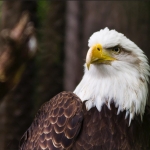 Minnesota Trail: This bald eagle was found in Wisconsin in 1997 suffering from lead poisoning and a broken wing. By the time she arrived at the University of Minnesota’s Raptor Center, her wing injury was deemed old and had already healed in a way that limited her flight – making her non-releasable into the wild. She arrived at the Zoo a year later, and today is a mature raptor in her early twenties! This eagle enjoys her treetop perch and tasty enrichment treats given by her amazing team of dedicated caregivers.

Bird Show: Still a diamond in the ruff, “Rousey” (named for her beauty, tenacity and fighting spirit) is just a few years old. She suffered a broken coracoid after likely being hit by a car. Because she has a limited ability to fly and is unable to adequately hunt in the wild, she was deemed unreleasable in 2013 and brought to the Minnesota Zoo. The dedicated Bird Show staff worked diligently to integrate her into the daily presentations, and as of mid-October, she is now part of the bird show!

Did you Know? Our nation’s symbol, the bald eagle almost went extinct in the wild due to habitat destruction, illegal shooting, pesticides, and poisoning. In June of 2007, after 40 years of successful conservation efforts measures, they were taken off the endangered Species List. Bald Eagles are still protected by the Migratory Bird Treaty Act and the Bald and Golden Eagle Protection Act, making it illegal to kill or possess an eagle (dead or alive) or any of its parts (including feathers).

Tomorrow, November 12, is Give to the Max Day! Please consider making a gift of any size to help the Minnesota Zoo continue to save wildlife…like our amazing bald eagles.