The Poweshiek skipperling is a small grassland butterfly that is on the brink of extinction. It was once common across the Midwest but has apparently disappeared from all but two locations: one in Michigan and one in Manitoba, Canada. With expert estimates of 150 – 500 adults remaining in the wild, it is now listed as Critically Endangered on the IUCN Red List and as Endangered federally in both the US and Canada. 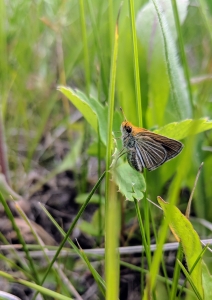 The Minnesota Zoo and Assiniboine Park Zoo in Winnipeg (APZ) have been collaborating to save Poweshiek skipperling on both sides of the US-Canada border. Both institutions have been head-starting and releasing adult butterflies back into the wild since 2018. While head-starting has been successful, and the numbers released each year have increased, population modelling suggests that more is needed to recover the species. This year, the International Poweshiek Skipperling Partnership decided to attempt breeding the species in human care for the first time. This more aggressive strategy for this species’ recovery was outlined in 2016 long-term IUCN-facilitated ex situ conservation plans.

To fill the knowledge gap in the breeding biology of Poweshiek, the two zoos had been breeding a close relative of Poweshiek, the Garita skipperling, since 2018. In July of 2020, the two zoos both attempted breeding captive-reared adults in 1×1 foot mesh popup enclosures. They had 72 hours to make it happen. “We had to work contingency measures into this new strategy” Laura Burns, Assiniboine Park Zoo said, “With so few [individuals] remaining, if our pairs did not breed at the zoo, we couldn’t afford to not release them back into the wild. This is why our team at APZ had dedicated staff observing the breeding pairs constantly.”

In the end, five out of eight attempted pairs of Poweshiek skipperling were bred between the two zoos. This success will now shape the future of the ex-situ recovery strategy. “Headstarting and population augmentation has provided an important conservation bridge, but it cannot be the only conservation solution long-term,” Erik Runquist of the Minnesota Zoo said. “Managed breeding presents the opportunity to increase the number we release each year and potentially introduce them to new sites, as well as establish an insurance population.” 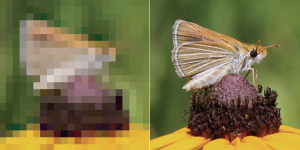 The blurry photo at left represents how near to extinction this species is, with total number of pixels representing individuals remaining in the wild. There are estimated to be fewer than 500 Poweshiek skipperling alive in the wild today.

In addition to working to restore the local populations, the zoos are contributing to research aimed at determining the cause of the decline. Minnesota Zoo, along with partners, has been spearheading research investigating the pesticide risk to Poweshiek in the US and Canada. The Assiniboine Park Zoo is currently working on sequencing the genome of both the Poweshiek and the sister species, Garita. The data that arise from these research questions will hopefully shape the recovery strategy of the species in the future.

Successfully breeding Poweshiek skipperling represents a monumental milestone in their conservation. This is an example where data collected from research was implemented in an existing conservation plan to pivot strategy. With the sudden and almost absolute decline of the Poweshiek skipperling, it will take every tool in the conservation tool box to replenish the species back to northern grasslands of North America.