A Record Season for Butterfly Conservation

The Minnesota Zoo’s Prairie Butterfly Conservation Program has certainly not slowed down this summer! With record numbers of butterflies reared and released into the field, it’s been the biggest year yet.

The Dakota skipper is a small sandy brown and orange butterfly with a one-inch wingspan. But don’t let its size deceive you. Like most skippers, it has a strong body capable of faster and powerful flight than many other butterfly species. Unfortunately, Dakota skipper numbers throughout the state are declining and they have disappeared entirely from most sites where they were once recorded. While there may well be several factors contributing to their precipitous decline, a loss of habitat has surely threatened the survival of Dakota skipper populations. Prairie once covered about 1/3 of the state of Minnesota and has now been reduced to only 1% of its original range. This drastic alteration in the landscape has not been helpful to the Dakota skipper which relies on high quality prairie habitat for survival. 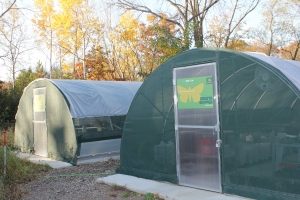 Hoop houses at the MN Zoo where much of the butterfly rearing takes place.

The Minnesota Zoo’s Prairie Butterfly Conservation Program works to study and save imperiled butterfly species throughout the state, including the Dakota skipper. Since 2017 researchers at the Zoo, in partnership with many other agencies, have reared Dakota skippers on Zoo site and released them into the wild in order to support and hopefully secure remaining at-risk populations in the region. And while it may sound like a fairly straightforward project, rearing and releasing insects at this scale is no small feat.

This past summer, approximately 350 adult Dakota skipper butterflies were released at Hole in the Mountain Prairie Preserve (HIMPP), a site where prior to reintroduction efforts they hadn’t been recorded since 2009. This year’s release of adult butterflies came after months of painstaking attention given to each individual at their various life stages. From egg to caterpillar to emergent butterfly, Zoo researchers and their support team carefully monitored the animals and altered their diet and habitat to ensure their greatest chance of surviving to adulthood. It is likely safe to assume that these are some of the most well-cared for butterflies on the planet! 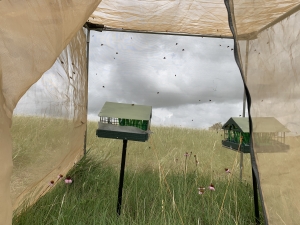 Dakota skippers fly about inside the newly setup tent at HIMPP before being released into the prairie.

This field season also brought some exciting new updates! Researchers at HIMPP were able to confirm for the first time that reintroduced individuals are breeding and repopulating. With the introduction of a new tent set-up this year, researchers were able to keep all new adults that were born at the Zoo separate from any newly emerged wild individuals that were born in the prairie. This allows them to survey the site before releasing new butterflies so they can identify any wild-born individuals. The goal of the Prairie Butterfly Conservation Project is to save threatened butterfly species in part by creating healthy and self-sustaining wild populations. By rearing and releasing butterflies each year, they hope to boost the local population and keep it from going extinct entirely. Yet, while crucial and worthwhile, this work is time consuming and intensive. Researchers hope that wild populations such as the one at HIMPP will one day soon be able to repopulate and sustain themselves without additional release efforts on our behalf. The identification of newly emerged wild adult butterflies is indeed a hopeful sign that the population at HIMPP is on its way there.

In addition to the work with Dakota skippers, the Prairie Butterfly Conservation Team also focuses efforts on Poweshiek skipperling conservation, a small orange and brown butterfly federally listed as endangered. Poweshiek skipperling were once of the most common prairie butterflies in Minnesota and is now nearly extinct. Today, there are estimated to be less than 500 individuals alive in the wild across the entire globe. 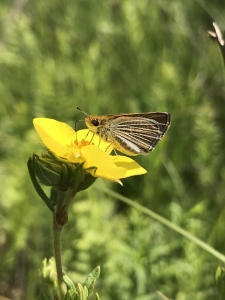 A female Poweshiek skipperling after release.

Zoo researchers, in partnership with other organizations and agencies, have focused reintroduction efforts on a few sites in Michigan located between Detroit and Flint. This past year, dozens of adult Poweshiek skipperling were released into the wild. This conservation work is crucial to the survival of this species whose numbers may be continuing to decline. As recently as 2012, hundreds of wild Poweshiek were sighted during day-long field observations. This past year, only a dozen or so were seen in the same timespan. While much work needs to be done to save Poweshiek skipperling, awareness and support is growing. The conservation staff at John Ball Zoo in Grand Rapids and researchers at Michigan State University are now joining forces with the Minnesota Zoo to further bolster the rearing and release of Poweshiek skipperlings.

While the Prairie Butterfly Conservation team has wrapped up another successful season of butterfly releases, they now focus their attention on the next generation of butterflies. With a record number of caterpillars to raise (well over 2,000 individuals already!), we hope next year will be an even greater success.

The Minnesota Zoo and the Prairie Butterfly Conservation Project would like to extend a huge thank you to our many partners that have made this work possible: U.S. Fish & Wildlife Service; The Nature Conservancy; MN Department of Natural Resources; Great Plains Zoo; Assiniboine Park Zoo; Michigan Natural Features Inventory; John Ball Zoo; Michigan State University; and Springfield Township.

Funding for the Dakota skipper conservation efforts is provided by the Minnesota Environment and Natural Resources Trust Fund as recommended by the Legislative-Citizen Commission on Minnesota Resources (LCCMR).

Funding for the Poweshiek skipperling conservation efforts is provided by a cooperative agreement from the U.S. Fish and Wildlife Service via the Great Lakes Restoration Initiative.