Welcome to our online library! Here, you’ll find cool facts about the native animals that live wild on the undeveloped area of the Minnesota Zoo. Biologists included profiles for some of the coolest species the staff found on Zoo site! Click here to learn more about the American mink!

Mammals are special in that they all provide milk for their young and have hair at some stage of life. They can also control their own body temperature, which means they can be active even in very hot or cold weather! Mammals get around by flying, swimming, hopping, crawling, digging, running, gliding, or swinging through the air. They also vary in what time of day they are active, where they live, how they find mates, and what they eat. With 78 species found in our state, there’s plenty to learn about Minnesota’s mammals! 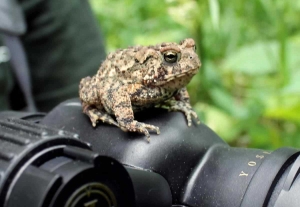 Click here to learn more about the American toad!

In Minnesota, amphibians include frogs, toads, and salamanders. What do these types of animals have in common? They all lack scales, claws, true teeth, and need water to reproduce. Their eggs and skin are very permeable, meaning water and other substances can flow through easily. It also means that amphibians can dry out easily, which is why they are often found near wet places. Like reptiles and insects, amphibians cannot control their body temperature themselves.  Instead, they must move to warm or cool places to get their bodies the right temperature. Although Minnesota can be very cold, there are 20 species of amphibians that live in this state! 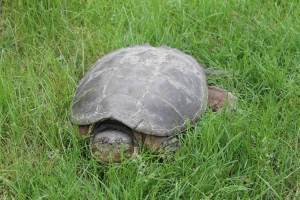 Click here to learn more about the common snapping turtle!

Reptiles have thick skin, are covered in scales, and often have claws. Unlike amphibians, reptiles lay eggs with tough shells, which can survive in drier places. Like insects and amphibians, reptiles rely on the environment to control their body temperature.  This is why you can often spot reptiles basking in the sun. Minnesota’s reptiles include 29 species of snakes, lizards, and turtles, although some scientists are thinking about making turtles a separate group! Look below for more information on these sun-loving creatures! 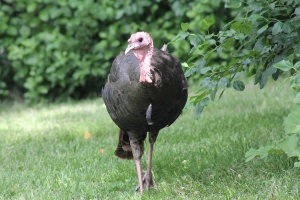 It’s pretty easy to tell which animals are birds – they have feathers! But that’s not all that makes a bird a bird.  Birds also have claws and scales (look for scales on their legs and toes!), and lay eggs with hardened shells. A bird also can regulate its own body temperature, just like mammals can. There are over 300 species of birds that can be seen in Minnesota at some time of the year! Some species, like cardinals, live in our state year-round.  Many others, however, only live here for part of the year. Birds in this group include species that make their way to Minnesota to breed and raise their chicks.  These birds usually arrive in the spring. Some stop only briefly on their way north or south, while others will actually migrate to Minnesota to spend the winter, after their breeding season in the far north ends. No matter the season, there are always fascinating birds to enjoy in Minnesota! 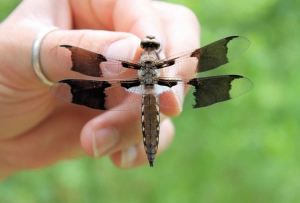 Dragonflies and damselflies make up the order Odonata, a subset of the insect group. These insects have very small antennae, large eyes, a long abdomen, two pairs of see-through wings, and a structure called a ‘labium’, which helps them hold their prey in their mouths. Dragonflies also need water for reproduction.  They lay eggs in or near the water and the young hatch into ‘nymphs’ that live underwater until they grow into adults. Because nymphs need clean water to live, these insects are often used by scientists to measure water quality in wetlands. Both nymphs and adults are carnivorous, and mainly hunt other insects.  However, they sometimes will hunt small vertebrates! Minnesota is home to about 140 species of odonates, although this number is growing as researchers continue to see more species in our state. Explore the amazing diversity of these animals in our state – you might even find a species that hasn’t been seen yet in Minnesota! 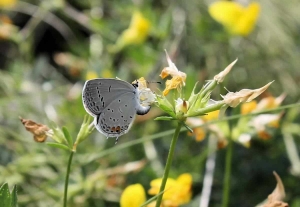 Butterflies and other moths are part of the order Lepidoptera, a subset of the insect group. These animals have long antennae, a long tube-like mouth, and two pairs of wings that are covered in tiny scales. They also have young that go through a caterpillar life stage. Butterflies are actually part of the moth group.  They can be separated from other moths by their antennae and behavior. Non-butterfly moths have feather-like antennae, and most species are active at night.  On the other hand, butterflies have club-like antennae and are active during the day. Like birds, some species of butterflies are migratory, while others spend their whole lives in Minnesota. About 146 species of butterflies can be seen in Minnesota, although some species are in decline. Learn more about these colorful creatures, and then be sure to check out our prairie butterfly conservation program!

<– Back to the main page