The Asian wild horse is also called Przewalski’s horse.  These true wild horses have lived in the grasslands of Europe, Central Asia, and China for thousands of years. Even though they have endured harsh climates throughout their history, they have always adapted and survived. That all changed when humans drove them to extinction in the wild by the late 1960s. Thankfully, several organizations were able to rescue some horses before they disappeared entirely. The horses taken into human care are the ancestors of all modern Asian wild horses.  Over the next several decades, these animals were bred in human care and their offspring were later released back into the wild.  Though still rare, the Asian wild horse is once again running free!  Reintroduction efforts in Mongolia and China have been underway since 1992.  There have also been small reintroductions in Russia and Ukraine. 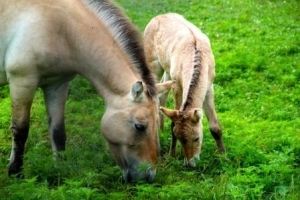 How Many Asian Wild Horses Are in The Wild?

There are about 500 Asian wild horses running free right now. Efforts to protect them and new reintroduction projects have helped a lot. These horses, that were once extinct in the wild, moved from being “Critically-endangered” to “Endangered” (According to the International Union of Conservation and Nature, or IUCN).

What is the Minnesota Zoo's History with Asian Wild Horses?

The Minnesota Zoo’s Collection Manager, Tony Fisher, is in charge of the Asian Wild Horse Species Survival Plan, a role he has had since 2012. The Zoo is still active in the conservation of this species and has created the True Wild Horse campaign.

Read more in our ZooTracks article:

And, in The Minnesota Hunter Jumper Association’s Newsletter:

Last of the Wild Horses

What are Zoo Biologists Doing to Help Asian Wild Horses in Mongolia?

In 1992, Asian wild horses were released back into the wild in Hustai National Park, Mongolia.  Today, about 300 horses live in the park.  While trying to increase that number, it is important to understand their habitat needs and how well the horses can survive threats like harsh winters and predators.

The Minnesota Zoo is securing a future for Asian wild horses by partnering with the Smithsonian Conservation Biology Institute and Hustai National Park. .  In April 2016, a team from the Minnesota Zoo led by our Conservation Biologist, Dr. Kate Jenks, placed GPS tracking collars on horses from eight different groups.   The data recorded from these collars will help scientists learn where the horses travel and where they find food and water.  This information could also help scientists decide where to place water holes or when to repair damaged habitat.  Such efforts would expand the area the Asian wild horses use and could greatly increase their numbers to a much higher and more secure level.  This will help ensure the population can survive the pressure from harsh winters and predation.

What are Zoo Biologists Doing to Help Asian Wild Horses in China?

Asian wild horses have also been reintroduced in the Xinjiang Province of China.  Jeff Muntifering, Conservation Biologist at the Minnesota Zoo, is working with the Smithsonian Conservation Biology Institute, China’s State Forestry Administration, and local people―the Kazak nomads―to study the horses.  Jeff has also worked in Namibia with local villagers to save rhinos through rhino tourism.  He may be able to use his skills to create new Asian wild horse tourism opportunities in China.  This would benefit local people by giving them a new source of income, and it would help the horses by showing that more horses can bring money into the area.

Read more in our ZooTracks article:

Blogs from the Field

Make a donation in support of Asian Wild Horses.