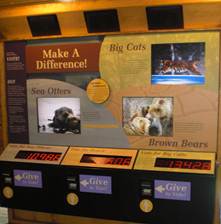 Conservation is an important part of the message for the Minnesota Zoo’s award-winning Russia’s Grizzly Coast exhibit.  If you have been to the Conservation Cabin, you have probably seen the donation station, and maybe even supported a bear, sea otter, or big cat conservation effort.  We appreciate your support, and we have been putting those funds to good use. 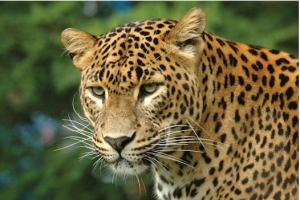 Fewer than 50 Amur leopards and 500 Amur tigers are thought to remain in the wild.  Habitat loss and poaching are the main threats to their survival.  Funds raised at the Zoo have been sent to the Amur Leopard and Tiger Alliance  and Tiger Conservation Campaign to support habitat protection, anti-poaching efforts, and leopard/tiger-themed educational programs for local communities. 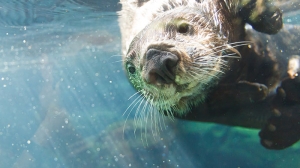 Sea otter populations are thought to have declined over 50% in the past 30 years. Most recently, funds raised at the Zoo were sent to support research at the Monterey Bay Aquarium that includes studying how sea otters live, the risks they face, and how they become sick or injured.  Previous funding has supported the Alaska SeaLife Center’s efforts to rescue and release injured and sick sea otters, and conduct research on their populations. Funds have also supported the work of Fish and Wildlife Service Biologist Verena Gill to understand disease threats to wild sea otters.

Brown bears are threatened by poaching and habitat loss.  Funds raised at the Zoo were recently sent to support the Range Rider program under the Greater Yellowstone Coalition.  This program places cowboys and cowgirls in critical areas to prevent conflicts between Yellowstone’s most famous predators and Montana’s livestock.  Previous funding has supported the Wildlife Conservation Society’s efforts to track bears and monitor their populations in eastern Russia.