In the mid-1800s, trumpeter swans (Cygnus cygnus buccinator ) were completely gone from the state of Minnesota.  The last wild trumpeter swan was seen in 1983 or 1984 at Swan Lake in Nicolett County.  In 1966, Three Rivers Park District started a project to breed trumpeter swans in captivity on lakes in their parks.  By 1980, swan numbers had reached 125 birds.  However, hatchlings were not moving out of the Parks to breed.

In 1980, Three Rivers Park District donated a pair of swans to the Minnesota Zoo.  The Zoo had partnered with the Minnesota Department of Natural Resources (MNDNR) to reintroduce swans to Minnesota.  The goal of the project was to have 10 breeding pairs of swans in the wild in Minnesota by 1996. 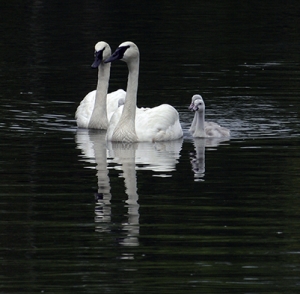 In 1986, the first trumpeter swans were released by the Zoo when they were 22 months old.  The swans were  wing clipped so they would stay at the release site and connect with the area before molting in their flight feathers in July or August.  Zoo staff  have raised 182 swans since then. The Northern Trail keeper staff cared for the three breeding pairs of swans and The Bird Trail keeper staff incubated eggs and raised the cygnets.

More than 350 birds from all partners were released through the Restoration Program.  When last counted in 2011, the program resulted in a wild breeding population of approximately 6,000 birds.  Thanks to the work of many people, the Restoration Program is a success and no longer needed.  Trumpeter swans are home again!

The Zoo no longer has a captive pair of trumpeter swans.  The pairs of swans nesting at the main lake (lake in the middle of the Zoo) are descendants of the birds released from the Zoo. They migrate from the Zoo in the fall with their cygnets and return in the spring to nest.