At one time, bison herds in North America were estimated to number between 30 and 60 million animals, and they roamed throughout Minnesota except the northeastern portion. Populations in Minnesota are unknown, but reports from the 1700s to 1800s suggest they were numerous. During the late 19th century, bison were hunted to near extinction until less than 1,000 animals remained in the entire United States. The last wild bison observed in Minnesota was in Norman County in 1880.

Bison were reintroduced to Blue Mounds State Park near Luverne in 1961. Genetic testing of the herd from 2011-2013 found they were largely free of any genetic material that would have come from cross-breeding with cattle, making them rare. Of the more than 500,000 bison in North America, less than 20,000 fit into this category.

In 2012, The Minnesota Zoo and the DNR entered into an agreement to work together to preserve the American bison. The Minnesota Bison Conservation Herd will expand from the 90 bison at Blue Mounds State Park to a 500-animal herd occupying several locations. Minneopa State Park will be the first of these additional locations welcoming the rare bison.

“We are excited about our bison conservation partnership with the DNR,” said Tony Fisher, Minnesota Zoo director of animal collections. “The Minnesota Zoo works on animal conservation projects around the world and we are proud to now be helping a rare species right here in Minnesota.”

The group of 11 bison brought to Minneopa include cow/calf pairs and yearling bison heifers; some of the cows are bred and will calve next spring. Eventually the herd will grow to 30-40 bison.

The public will be allowed to drive personal vehicles through the range on a hard-surfaced road.  The interpretive focus will be the historic relationship between bison and humans. However, it will take time for the bison to get used to their new home.

Kathy Dummer, regional manager for the DNR’s Parks and Trails Division, said the entire campground side of Minneopa State Park will be closed until the bison are acclimated. “We ask that the public be patient while the bison settle in,” Dummer said. “We anticipate opening things back up by mid-October.”

Be a Bison Buddy and Help Make a Difference 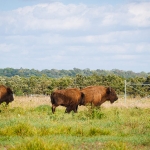 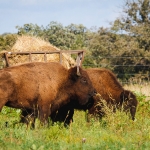 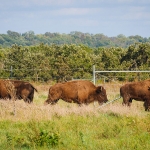 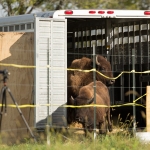 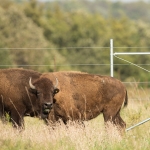 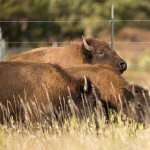