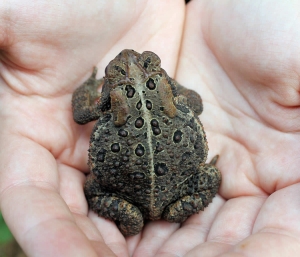 The back of an American toad. The two large, kidney-shaped glands on the back of the head are called parotoid glands, and can secrete toxins when the toad is threatened.

The American toad is a member of the ‘true toad’ family, Bufonidae, and is the most common toad in Minnesota. It ranges in color from dark brown to tan, and some have a light line down the middle of the back. Along the back, they have dark, brown-to-black splotches associated with bumps, commonly referred to as warts. However, these ‘warts’ are quite different than human warts, and are actually skin glands. Males and females can most easily be distinguished by size and throat color; male American toads are smaller than females, and have dark coloration on the throat. The American toads’ body length (not including legs) varies from 2-3.5 inches (5-9 cm).

What they eat
Adult American toads are carnivorous, consuming insects, worms, spiders and slugs. Tadpoles feed on aquatic vegetation and are considered herbivores. Adults are an important food source for a variety of birds, such as hawks and herons, and snakes, such as garter and hognose snakes. Tadpoles are prey for aquatic invertebrates such as diving beetles. Their primary predators as adults are snakes including garter and hognose snakes.

Where they live
The American toad lives throughout most of Minnesota. They are found in diverse habitats, including woodlands, grasslands, and various wetlands. Like all frogs and toads, this species lays its eggs in freshwater wetlands. Eggs are laid in two spiral rows, and can measure 20 to 66 feet long. Females lay 4,000 to 20,000 eggs, which hatch within 2 to 8 days. Depending on water temperature, these eggs transform into tadpoles in 30-60 days. In warmer water, less time is needed for eggs to hatch and transform. Tadpoles school along the shallow areas of ponds and streams, and usually metamorphose into toadlets in late July. Toadlets are less than 0.5 inch (1 cm) in length when they transform.

What they do
American toads can secrete a bitter tasting toxin through a pair of glands, called parotoid glands. These glands look like two enlarged, kidney-shaped ‘warts’ sitting on the back of the head. The toxicity of parotoid secretions vary by toad species.

To defend itself from predators, an American toad will inflate itself to appear larger. Hognose snakes feed almost exclusively on toads and can use their rear-facing fangs to deflate a toad that has inflated itself in defense.

The American toad hibernates by burrowing. Winter dormancy typically begins in early October but can begin later in the month. They burrow by digging backwards far enough to stay below the frost line and will adjust their depth as the frost line shifts. They will emerge from dormancy typically in late April and move to breeding pools soon after, from early May to mid-June.

How they’re doing
The American toad is not listed as threatened or endangered on state or federal lists. In Minnesota, populations are considered stable. However, like all frogs and toads, this species is sensitive to habitat loss and water pollution.

Are there other species like this on Zoo site?
The Canadian toad (Anaxyrus hemiophrys) and the Great Plains toad (Anaxyrus cognatus) can be found in the western portions of Minnesota, but only the American toad can be seen on Zoo site.