The Minnesota Zoo is excited to announce that its female Malayan tapir calf, the first born at the Zoo in more than 20 years, has been named “Amirah” (pronounced “ah MEER ah”) through a public naming contest. Amirah, which means princess, was the winning name with 401 votes.

Amirah, born at the Zoo on July 20, has quickly become a guest favorite. Growing rapidly, she now weighs 101 pounds and can be seen on exhibit each morning with her mother “Bertie.” For the first 6-8 months of life, tapir calves resemble furry watermelons with legs. They are dark brown to black with alternating bands of yellowish-white stripes and spots. Young tapirs can weigh as much as 450 pounds at one year of age and reach adult size in about 2-3 years. 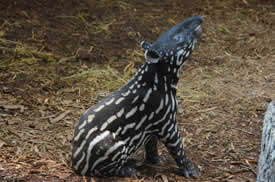 In human care, the Malayan tapir is managed for breeding purposes by a Species Survival Plan® (SSP), which, through the coordinated efforts of several zoos throughout the United States, helps maintain the gene pool for the future aid of the wild population. The Minnesota Zoo currently participates in 60 SSP programs, including that of the Malayan tapir. The Zoo had four prior Malayan tapir births, the last one occurring in 1991.