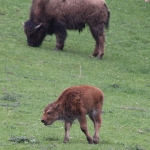 Apple Valley, MINN – May 10, 2016 –  The Minnesota Zoo is excited to announce the birth of a bison calf, its first in 2016. The birth is especially exciting for the Zoo, as bison were recently named the first national mammal of the United States after President Obama signed into law the National Bison Legacy Act.

The Minnesota Zoo’s calf, born April 30 and thought to be a male, is the 43rd bison born at the Zoo since it opened in 1978 (the first birth was in 1981). The herd of nine, which is expecting more calves this year, can be found on the Northern Trail.

In 2012, The Minnesota Zoo and the Minnesota Department of Natural Resources (DNR) entered into an agreement to work together to preserve the American bison – and in 2015, 11 genetically-rare bison were released into Minneopa State Park near Mankato as part of a mutual effort to expand the Minnesota conservation herd from 90 to 500 animals occupying several locations. Minneopa State Park was the first of these additional locations welcoming bison.

About Bison:
Massive and thick-coated, bison were once the icons of North America’s Great Plains – the largest land animals on the continent. They were also once the most abundant, with an estimated 30 to 60 million before European settlement. Populations in Minnesota are unknown, but reports from the 1700-1800s suggest they were numerous. During the late 19th century, bison were hunted to near extinction until less than 1,000 animals remained in the United States. The last wild bison observed in Minnesota was in Norman County in 1880.