The Minnesota Zoo’s Stewardship Award recognizes outstanding education and conservation stewardship efforts that generate public awareness and support for saving our world’s wild animals and wild lands.  Bestowed since 2008, the award is designed to promote leadership by example and inspire others to take action on behalf of our world’s wildlife.

Maritz joined the Board of the Minnesota Zoo Foundation in 1997 and served for 11 years, including two years as its Board Chair.  Immediately after stepping down as Board Chair, he became Chair of the Heart of the Zoo campaign, the largest fund-raising campaign in the Zoo’s history.  Thanks to Maritz’s leadership and generous contribution to the campaign, Heart of the Zoo secured more than $76 million from the State of Minnesota and private donors. 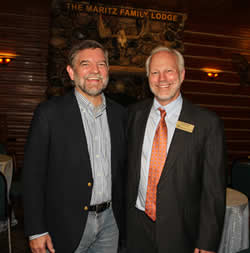 “Peter has been deeply engaged in zoos since growing up in St. Louis and frequenting the St. Louis Zoo,” said Minnesota Zoo Director/CEO Lee Ehmke. “His contributions to the Minnesota Zoo have been varied and numerous: through his leadership, professional advice and financial generosity, Peter has had an enormous positive impact on the Minnesota Zoo.”

Maritz is currently a Minnesota Zoo trustee, and an active member of the Zoo Board’s Public Affairs Committee which advocates on behalf of the Zoo at the Minnesota State Legislature. He continues to be an integral part of planning the annual Beastly Ball gala.