Apple Valley, MINN – December 30, 2016 – The Minnesota Zoo is thrilled to accept a generous donation from local Eagle Scout Troop #248 from West St. Paul, who built eight new nest boxes for the waterfowl that live along the Zoo’s Tropics Trail. These boxes will help the Zoo’s tropical ducks safely breed and nest along Gibbon Island.

The Zoo’s Gibbon Island habitat features twenty-five different species of waterfowl. The diversity of the waterfowl species is based on several components, including geographical location, bill adaptation, plumage, and compatibility. One of the major deciding factors was the nesting season and behavior of each of the species. The Zoo could not have all twenty-five breed at the same time of year, competing for the same habitat needs. Each species has its typical few months per year that they go to nest along the lake, and in different locations such as in cavities or on the ground. This helps reduce aggression and breeding stress between all of the birds in the habitat.

“Many of the species here are scrape nesters, where they make a depression in the soil hidden by plants. Since we have limited nesting habitat on the lake, nest boxes that simulate this protective plant barrier are offered for them to create their scrape nest inside. The slatted boxes that Zach and his troop built for us are a needed resource for birds to successfully breed here,” says Jamie Toste, Curator of Birds at the Minnesota Zoo. “We greatly appreciate the troop’s generosity towards the Zoo and their dedication to nature.” 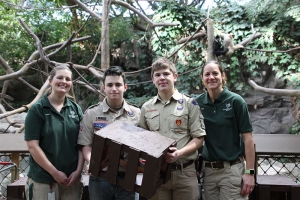 “I wanted to build these houses to give back to nature,” says Troop Leader, Zachary Apitz. It took a total of four hours to build and paint the nest boxes with the help of seven scouts, as well as three students from the STA/VIS Clay Target Team. The troop is composed of scouts from all over the metro area. “I thought it would be good for us to give back to the ducks with this gesture.”

The Minnesota Zoo is home to eight species of threatened to endangered ducks, including the critically endangered Baer’s pochard native to southeast Asia. Toste is the studbook keeper and helps to manage the Species Survival Plan (SSP) for Baer’s Pochard housed in the North American Region, and monitors these populations for contribution to the Baer’s Pochard Task Force.

The Minnesota Zoo is a year-round destination located in Apple Valley, just minutes south of Mall of America. The Zoo’s mission is to connect people, animals and the natural world to save wildlife. For more information, call 952.431.9500 or visit mnzoo.org. The Minnesota Zoo is an accredited member of the Association of Zoos and Aquariums (AZA) and an institutional member of the World Association of Zoos and Aquariums (WAZA).