Apple Valley, MINN – June 22, 2017 – The Minnesota Zoo, in partnership with The Nature Conservancy, Minnesota Department of Natural Resources and the U.S. Fish and Wildlife Service, will conduct the first-ever reintroduction of the Minnesota-native Dakota skipper prairie butterfly at The Nature Conservancy’s Hole-in-the-Mountain Prairie preserve this summer. This once widespread species has nearly vanished from Minnesota and is now listed as threatened on the national Endangered Species Act list and as endangered by the state of Minnesota.

“This is what we have been working towards,” says Dr. Erik Runquist, Minnesota Zoo’s butterfly conservation biologist. “These amazing butterflies have a chance to thrive again thanks to all the efforts of the Minnesota Zoo and our outstanding partners. This is definitely a team effort and we are thrilled to have made so much progress thus far.” 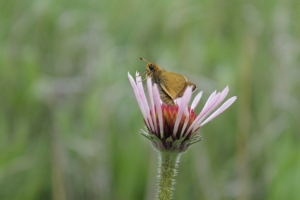 In partnership with multiple agencies, the Minnesota Zoo began a conservation breeding program for Dakota skippers behind the scenes at the Zoo in 2013. The program began by visiting sites within the Sisseton Wahpeton Oyate tribal lands in South Dakota where females were collected and released after 48 hours. The eggs they laid were brought back to the Zoo and raised. In 2014, the Minnesota Zoo became the first institution to successfully breed multiple generations of Dakota skippers entirely in human care. The program has since expanded to include individuals from Minnesota.

Although this release marks a significant milestone for the dwindling species, there is much more to learn and do to re-introduce Dakota skippers to sites where they were once found. “Although we are thrilled to have learned and accomplished this much so far, there is still a long road ahead for these butterflies before they’re in the clear,” continued Dr. Runquist. “This is the first time a reintroduction has been attempted for this species and we are looking at this as a valuable learning opportunity for future success.”

The Dakota skipper is native to central North America and is a prairie specialist that can live in no other habitat. Today, only about 1% of Minnesota’s original tallgrass prairie remains and much of what is left is fragmented into small isolated remnants. Dakota skipper caterpillars feed solely on grasses and adults feed on nectar from a variety of prairie flowers, like the narrow-leaf purple coneflower. Although the average lifespan is one year, this butterfly lives only about two weeks as an adult.

Years of surveys by Minnesota Department of Natural Resources biologists indicate that Dakota skippers have likely disappeared from dozens of sites across Minnesota and now can only be found in one or two places in the state. The species was once common at the Conservancy’s Hole-in-the-Mountain Prairie but has not been seen at the preserve in eight years.

“What’s happened to these little butterflies tells us that something is wrong with the overall health of our prairies,” said Marissa Ahlering, the Conservancy’s prairie ecologist in Minnesota, North Dakota and South Dakota. “Healthy grasslands cleanse our water, help prevent soil erosion and provide habitat for birds, butterflies and thousands of other plants and animals.

“We’re hoping we can better protect, manage and restore prairies by reintroducing the Dakota skipper to Hole-in-the-Mountain Prairie and other sites where they were once found and studying why they succeed or fail.”

The Minnesota Zoo is a year-round destination located in Apple Valley, just minutes south of Mall of America. The Zoo’s mission is to connect people, animals and the natural world to save wildlife. For more information, call 952.431.9500 or visit mnzoo.org. The Minnesota Zoo is an accredited member of the Association of Zoos and Aquariums (AZA) and an institutional member of the World Association of Zoos and Aquariums (WAZA).