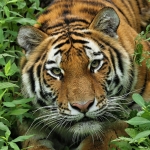 Apple Valley, MINN – May 9, 2016 –  The Minnesota Zoo is sad to report the unexpected death of “Nadya,” a popular Amur tiger who passed away at the Zoo over the weekend.

Nadya hadn’t been feeling well the week prior to her death, and had been under the medical and supportive care of veterinarians and zookeepers around the clock. When her medical situation didn’t improve, she was anesthetized for emergency exploratory surgery in an effort to determine the cause of her illness. She survived her surgical procedure, but passed away soon afterwards despite all medical attempts to revive her.

Nadya, age three, arrived at the Minnesota Zoo as a young cub from the St. Louis Zoo in the summer of 2012 to join Minnesota Zoo-born cub “Sundari.” Both cubs had been hand-raised since birth after their mothers weren’t able to properly nurse them, and animal care staff from both zoos, along with the Association of Zoos and Aquariums (AZA) Tiger Species Survival Plan Coordinator, decided it would be best to raise both cubs together at the Minnesota Zoo.

“We are very sad over the unexpected passing of Nadya,” said Kevin Willis, the Minnesota Zoo’s vice president for biological programs. “Because she was hand raised here, she was one of our favorite animals and despite receiving the very best in medical care, she unfortunately didn’t survive. She will always be remembered by staff and volunteers as a sweet-natured tiger.”

Blood tests prior to her death showed compromised liver function; the results of a necropsy (animal autopsy) are pending.

Since it opened, the Minnesota Zoo has welcomed over 40 Amur tiger cubs. The Zoo currently cares for four other tigers: “Sundari” and “Patrice” (three years old), “Putin” (six years old), and “Molniy” (16 years old). At his age, Molniy has already surpassed the frequently reported lifespan of 10-15 years for wild tigers, and can be considered an elder statesman of the tiger population. He is being treated for a variety of age-related conditions including arthritis.

The largest of all cats and one of six remaining tiger subspecies, the Amur tiger is a top predator of far eastern Asia.  Amur tigers are carnivores, eating mostly large mammals such as deer and wild boar.  They will travel over extensive forest territories in search of food.  Concerted conservation efforts help protect these endangered animals from the persistent threats of poaching and habitat loss.

Amur tigers in human care are managed by the AZA’s Tiger Species Survival Plan® (SSP). Minnesota Zoo staff members have coordinated the Tiger SSP for more than two decades and continue to lead efforts conserving tigers in the wild. Those efforts include the coordination of the Tiger SSP’s new Tiger Conservation Campaign, aimed at raising awareness about the plight of wild tigers and funding for their conservation. Since January 2012, Minnesota Zoo guests, members and supporters have raised funds to support conservation and anti-poaching efforts in the Russian Far East. Additionally, the Minnesota Zoo is one of 15 coalition members that comprise the Amur Leopard and Tiger Alliance.