Both the weedy seadragon (Phyllopteryx taeniolatus) and leafy seadragon (Phycodurus eques) are close relatives of seahorses. Seadragons have extra decorative fins that help them blend with the floating seaweed in which they live.

The small size of the seadragon’s snout limits the food it can eat. Seadragons eat tiny sea creatures, mostly shrimp-like animals called mysids. They may suck in as many as 1,000 mysids in a day.

Seadragons exist in only a very small part of the earth’s oceans, relying on particular kelp (seaweed) forests off the southern coast of Australia.

Seadragons swim slowly with nearly invisible movements of their fins but mostly go with the flow of the water among the sea plants they resemble.

Seadragons came close to disappearing in the 1990s due to pollution and habitat loss. Since 1999, Australia has officially protected these species, although their numbers are still thought to be decreasing. 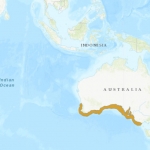 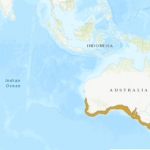 Both the leafy seadragon and weedy seadragon are listed by the International Union for the Conservation of Nature as species of “Least Concern” for extinction. In 1999, Australia passed the Environment Protection and Biodiversity Conservation Act which protects seadragons and other species.

The greatest threat to seadragons is habitat loss and degradation from pollution. Non-native, invasive species, such as sea urchins may also be contributing to habitat loss. Additionally, accidental capture when fishing for other species may be a problem in some areas. The populations of leafy and weedy seadragons are thought to be decreasing, however, further research is needed.