Rhinoceros hornbills mostly eat fruits, especially figs. They also eat bird eggs, bugs, small reptiles and frogs. They pick up food with their beak and throw their head back to swallow it down.

Rhinoceros hornbills are found in undisturbed, dense lowland forests in Indonesia, Brunei, Malaysia and Thailand. They depend on large trees for nesting and feeding.

Hornbills have an interesting nesting strategy in which the female is sealed in a tree cavity for 80-90 days with the egg, and later chick. The male feeds them through a small opening in the nest. When the chick is about 45 days old, the female leaves the nest. Both parents and chick then reseal the nest, leaving only the small opening for food. The chick remains safely sealed inside, fed by both parents, until it is about 80 days old.

With decreasing numbers, rhinoceros hornbills are listed as “vulnerable.” The greatest threats to their survival are deforestation and hunting. 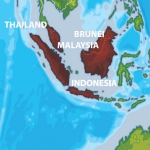 The Minnesota Zoo currently participates in the Rhinoceros Hornbill Species Survival Plan (SSP). In coordinated efforts with other zoos across the country, we are working to maintain genetic diversity and increase successful breeding in the zoo and aviary population. The first successful hatch of a rhinoceros hornbill chick at the Minnesota Zoo occurred in 2018.