Madagascar teal are also known at Bernier’s teal. They are a species of small, brown duck with a pinkish-grey bill. The wing has a distinctive black patch called a speculum, bordered with white. Males and females look similar.

This duck wades in shallow water and feeds by dabbling—it lowers its head in the water and filters food items through its bill. It has been observed eating small invertebrates and plant matter.

These African waterfowl are found only in a narrow strip along the western coast of Madagascar. They are usually found in coastal lakes, mangrove forests, and estuaries with adjacent wetland or marshes. Annually, they cycle through very particular breeding, molting, and non-breeding habitats.

Madagascar teal live in pairs or small groups. When nesting, a pair can be very territorial. They nest in tree holes (cavities) in mangrove trees close to or above the water. A nest may contain 2-10 eggs.

Madagascar teal are endangered. Their yearly cycle depends on a series of habitats which are themselves threatened by timber extraction, prawn production and rice cultivation. Hunting further contributes to the decline of wild populations. The total population is estimated at 1,500-2,500 individuals and is decreasing rapidly. 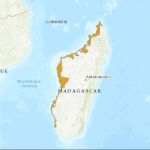 The Madagascar teal is endangered and only found in western Madagascar.  The species is threatened by the destruction of wetland habitat and hunting. Installing nest boxes is one way that the breeding efforts of wild birds may be boosted.

Things the Zoo’s Done/Doing
Madagascar teal are now part of a Species Survival Plan (SSP) —a breeding program in zoos to help maintain a genetically diverse backup population for the species. The Minnesota Zoo participates in the SSP by exhibiting and breeding Madagascar teal.