Komodo monitors, commonly known as Komodo dragons, are the largest lizards in the world. Their unusual size has evolved as the result of needing less food (a slow metabolism) and not having to compete with other carnivores on their island habitat. A top predator, their hunting strategy is based on stealth and power.

These giant reptiles are only found on three small Indonesian islands where the climate is hot and dry for most of the year. They live in dry open grasslands or in the lower levels of tropical forests. After hatching, young live in trees until age four to avoid being eaten by adults.

Komodo dragons are largely solitary, coming together only to breed and eat. Female dragons may lay up to 30 eggs in underground nests during the dry season. Females may defend their nest for a period of time after egg laying. Incubation takes approximately 8-9 months. To maintain their body temperatures, Komodos bask in the morning sun and avoid temperature extremes by using shady areas in the afternoon and burrows at night.

Minnesota Zoo’s original Komodo dragons were a gift from the President of Indonesia where they are a national treasure.

In 1992 the National Zoological Garden achieved a milestone by becoming the first institution outside of Indonesia to breed and successfully hatch out komodo dragons.  Gasher, our male Komodo dragon, was from that first hatching in October of 1992.  In 1993 he was transferred to the Atlanta Zoo and we received him from them in 2001.  At that time when he was a young 9-year-old, weighed about 75 pounds, and was roughly 5 feet in length.  Today he is a whopping 125 pounds, closer to 8 feet, and fully muscled out.   Even at his size we watch how much he eats so he doesn’t put on too much fat, which is a common problem with this species.  He is fed 1 1/3 pounds of food twice a week, which includes a variety of items ranging from poults, quail, rat pups, mice, chicks and herring.  On exhibit and behind-the-scenes he has heated areas and special light bulbs to simulate natural sunlight.  He basks under these as he digests his food.  He especially chooses to lay in the areas that heat up to 120 degrees F° !

Komodo dragons are vulnerable due in part to their limited range. Komodo National Park, established in 1980, and strict anti-poaching laws have helped protect the dragons.

The limited range of the remaining wild Komodo dragons puts them at risk from human encroachment, decline or loss of prey, habitat loss, competition with exotic species, and natural catastrophes.

Legal protection of Komodos has reduced commercial hunting, but they are sometimes poisoned by villagers to protect children and domestic animals. The U.S. Fish and Wildlife Service has classified this species as endangered and there is now an area designated as Komodo National Park where the animals are protected. 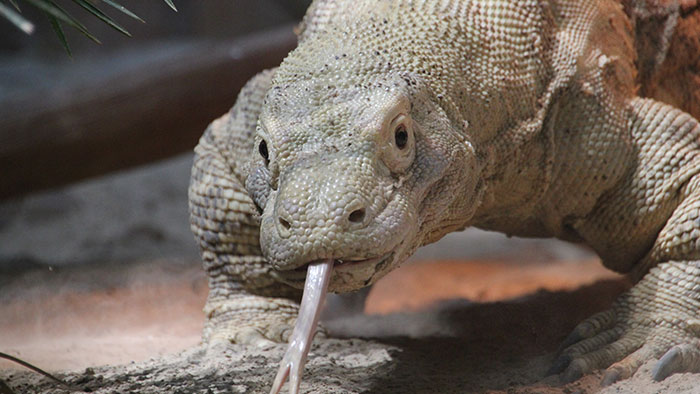 The Minnesota Zoo is active in the Komodo Dragon Species Survival Program (SSP), a captive breeding program designed to maintain a genetically healthy population of dragons in captivity. In 2002, on the recommendation of the SSP, one of the Minnesota Zoo’s Komodos was sent to the Toronto Zoo to be paired with two female dragons. The breeding was successful and in 2003, “Satu,” meaning “number one,” was the first Komodo dragon hatched in Canada!

In 1998, BJ Schoeberl, Minnesota Zoo Tropics Supervisor, traveled to Indonesia with five other zoo professionals to collect information on wild Komodo dragons. While there, she observed a wild female nesting and hatchlings emerging from a burrow. The data she helped collect has been extremely helpful to the successful management and breeding of Komodos through the Komodo DragonSSP.