Our special guests are ready to begin making a bigger splash!

The dolphins from Brookfield Zoo who are staying at the MN Zoo while their habitat is being renovated will begin having access to explore the public-viewing pool in Discovery Bay. The group will be given the time they need to fully acclimate and may be more and more visible in the days ahead. Once fully acclimated, training demonstrations will be part of their regular routine. We’ll share more soon on when the demonstrations will begin.

Beginning Friday, December 23, join us for daily dolphin demonstrations at 10:30 am and 1:30 pm in Discovery Bay. You’ll learn all about these active and acrobatic marine mammals.

Our daily Dolphin Training Demonstrations are included with Zoo admission, but with limited seating, reservations are needed. Once you select your day and time to visit the Zoo, click the 'Checkout' button in your cart. A pop-up prompt will allow you to check availability and reserve a spot for training demonstrations, which take place at 10:30 a.m. and 1:30 p.m. each day. If you were unable to click the prompt, a link will also be provided within your general admission order confirmation.

How do I attend a Dolphin Training Demonstration?

Seating is limited so reserve your tickets today – there is no additional fee to attend Dolphin Training Demonstrations.

1 – Start by visiting Plan Your Visit and click “Get Day Timed Tickets Today!”

*Please note, if you need both accessible and regular seating tickets, please add one type of the ticket to your cart then press the back button in your browser to navigate back to the “Dolphin Training Demonstration” page to add the other type.

What will I experience at a Dolphin Training Demonstration?

During training demonstrations, the Brookfield Zoo team at the Minnesota Zoo will introduce you to a wide range of dolphins’ natural behaviors. You’ll learn how the care staff support dolphins’ health and well-being through exercise, socializing and learning new skills. Come see dolphins communicate, feed, problem-solve and play! These daily sessions will be about 15-20 minutes in length and generally feature a rotation of 3-5 dolphins. For those with sensory sensitivities, please note, music is played before and during the demonstration and microphones are used throughout.

If you have reserved tickets for the 10:30 am Dolphin Training Demonstration, please consider arriving early to ensure you have enough time to make your way to Discovery Bay to be seated for the demonstration. Once the demonstration begins, we are unable to provide access to any late-arriving guests.

Can I attend a Dolphin Training Demonstration without an advance reservation?

Dolphin Training Demonstrations are included with your Zoo admission; however, with limited seating available, advance reservations are needed. If capacity allows, guests without reserved seats will be able to attend a demonstration on a first-come, first-served basis until capacity is reached.

Can I see the dolphins without attending a Training Demonstration?

Yes! Underwater viewing is accessible in our Discovery Bay Great Hall. Additionally, when demonstrations are not taking place, our upper-level animal viewing area will be open to guests.

Bottlenose dolphins are among the most widespread and common species of whales, dolphins and porpoises. The Minnesota Zoo is temporarily housing these dolphins while their habitat is under construction at Brookfield Zoo in Illinois.

Where they live :
Bottlenose dolphins live in tropical and temperate ocean waters around the world. They may be found offshore in deep waters or in coastal areas such as bays, marshes, or even in large rivers that empty to the sea.

What they eat:
These animals are active predators that prey on a variety of fish, squid and crustaceans, such as shrimp. Adults eat about five percent of their body weight daily.

What they do:
Dolphins communicate using a series of squeaks, grunts, whines, clicks and whistles. Touch is also used in communication.

How they’re doing:
Bottlenose dolphins are protected throughout much of their range. Overall, they are not threatened with extinction, however certain subpopulations are endangered. The main threats to dolphins include pollution, habitat degradation, overfishing and interactions with fishing gear. 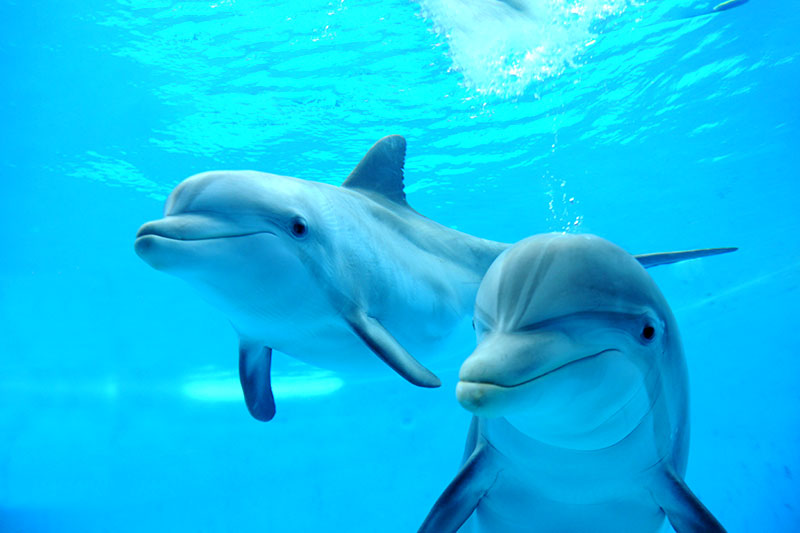 Organizations accredited by the Association of Zoos and Aquariums, such as Minnesota Zoo and Brookfield Zoo, have enrichment programs to ensure that the physical and mental needs of all animals in their care are met.

What is Enrichment?
Enrichment is a process for enhancing an animal’s well-being. Teams of animal care specialists and others work to make changes to an animal’s care or environment. These changes provide animals with choice, stimulation, and are designed to encourage natural behaviors. Natural dolphin behaviors include foraging, problem solving and play.

Big Benefits
Marine mammal enrichment programs are just as important to animal welfare as proper nutrition, high-tech water filtration systems, and regular vet check-ups. They provide a win-win-win situation for animals, animal care specialists and guests by reinforcing the bond between animals and their caretakers and providing fun, educational opportunities for visitors.

Variety is Key
There are many kinds of dolphin enrichment. Sensory enrichment might include natural underwater sounds or sprinklers over the water’s surface. Items such as basketballs and puzzle feeders can promote exploration and exercise. Interaction with animal care specialists during training sessions is a form of enrichment as well.

Training 101
Training programs inspire animals to participate in their own health care. Each dolphin in this group knows roughly 150–250 behaviors. Commonly learned behaviors include opening mouths for exams, blood sampling, and presenting their body for ultrasounds.

Allison, born in 2005, is the youngest and known as a playful member of the group

Lucky, born in 1974, is the oldest of the group and father of Noelani

Noelani, born in 2003, is sister to Allison and is known for her tail-splash and close relationship with her sister and Spree

Spree, born in 2002 at the Minnesota Zoo, is known for being very connected with the entire group, especially Noelani

Tapeko, born in 1982, is the mother of Noelani and Allison

Apple Valley, MN – November 4, 2022 – Minnesotans will have a new, temporary opportunity to connect with the ocean, along with some of its most charismatic marine mammals, with a visit to the Minnesota Zoo.

In partnership with fellow AZA-accredited institution Brookfield Zoo in Illinois, the Minnesota Zoo is assisting with the temporary housing of seven bottlenose dolphins. These dolphins were transported to the Minnesota Zoo from Brookfield Zoo on November 2. The animals are being given time to acclimate behind the scenes and the Zoo will announce on social media when they will be publicly visible.

“The Minnesota Zoo has a long history of partnering with sister institutions in the fields of animal care, health, and conservation,” said Minnesota Zoo Director John Frawley. “By temporarily providing housing to Brookfield’s dolphins, as we similarly did in 2009, we are assisting our colleagues in Illinois as they make habitat improvements, while also helping connect Minnesotans to this incredible species and the importance of ocean conservation.”

“We are grateful to our colleagues at the Minnesota Zoo for providing a space for our dolphins while their home habitat is being renovated,” said Rita Stacey, Vice President of Animal Programs for the Chicago Zoological Society. “The size of the marine mammal pools at the Minnesota Zoo allows our entire dolphin group to remain together, which helps in the acclimation to their new temporary home.”

The Minnesota Zoo housed dolphins until 2012. The dolphins being cared for at that time were moved and integrated into larger groups at partner institutions. For the wellbeing of dolphins, they need to live in social groups, and the Dolphin Consortium – a partnership program of a select number of accredited dolphin facilities that advises on dolphin care, placement, and genetic diversity within accredited zoos and aquariums - determined a proper social configuration was not available for the Minnesota Zoo.

Since then, the Zoo has played a critical role in housing Hawaiian monk seals, one of the most endangered marine mammals in the world. In 2015, a group of five senior, non-releasable Hawaiian monk seals joined the Minnesota Zoo to be ambassadors for their wild counterparts. The Minnesota Zoo has been the only institution to house this species within the continental United States. As the years have gone by, the group of Hawaiian monk seals has become smaller, now with only one seal in the Zoo’s care – Ola, who turned 27 in June. Known for being a solitary species, Ola continues to receive the specialized care and enrichment she needs with her advanced age.

This new, temporary arrangement of housing dolphins provides Minnesotans with a unique opportunity to view another engaging marine mammal and learn about the importance of conserving our world’s shared ocean. Once the group fully acclimates, the dolphins will be visible in the Zoo’s Discovery Bay. The pools in Discovery Bay recently underwent a number of behind-the-scenes updates to allow for the dual care of dolphins and Ola – with Ola having solo access to the main pool at times, followed by dolphin-exclusive access.

Follow the Minnesota Zoo’s website and social media channels for updates on when the dolphins will be visible to the public.